Where is the year going?

Time seems to be speeding by, not that I am "old" - but they say it goes quicker the older you get ... it does.

I have a few finished objects to share.  I have been quite monogamous with my knitting lately.

This was a KAL last year focusing on peace in your life and the world.  It was a fun KAL and the pattern was intended to be easy so you could kind of meditate and be peaceful while you were working on it. 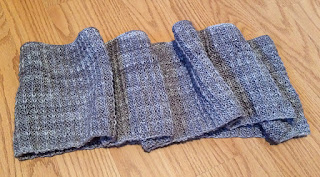 These socks were my Christmas Eve cast on. I knit them up in the Making Christmas colorway (Nightmare Before Christmas reference).  Plain vanilla socks with Fish Lips Kiss Heel - I love how the heels/color turned out! 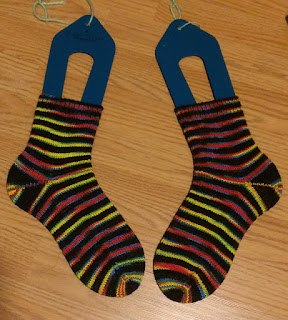 This was an AWESOME pattern to knit!  I have only done Brioche once before and it was just a section in a shawl.  This was Brioche in the round and after several rows, it started to make sense to  me.  It was super fun to knit and see how the stitches all lined up and formed. 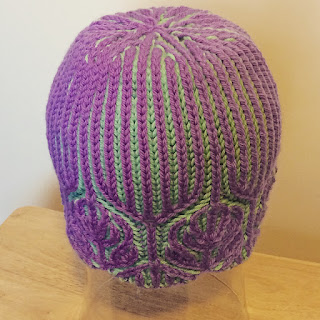 And that's all for knitting!  Like I mentioned, I've been quite monogamous, but three projects completed in three months makes me happy.  I'll be back with spinning later.
Posted by Delusional Knitter at 11:48 AM 7 comments: 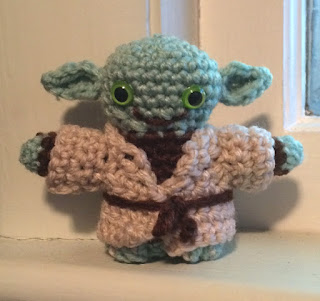 My first try at crocheted Amigurimi.  It was a little tricky and fiddly but I figured it out.

Definitely fun, much easier if you know what you are doing and its pretty quick to work up.  I have to work on my crochet tension, I tend to "throw" the yarn as if I was knitting and it makes for awkwardness and uneven tension.

Posted by Delusional Knitter at 11:21 AM 2 comments:

I recently got a new spinning wheel.  I had been thinking about another one for a while.  The JMS Cassandra has different ratios and a larger orifice than my other wheels.  The operation is also different.  She has a stretchy poly drive band and the whorls are on the back, it goes up to a spool on the back of the flyer to drive the flyer and bobbin.

She arrived in a huge box.  All wrapped up and ready for assembly. 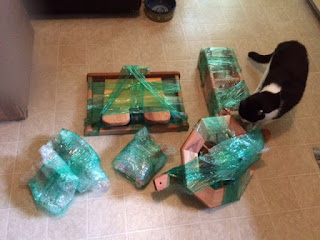 Assembly was easy, I did have some huhs?  and oopps? but it was all me - its really quite simple. 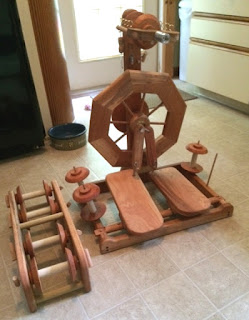 She quickly got along with the other two, but doesn't quite fit in the room, LOL!  I have to do some rearranging to find her a permanent spot. 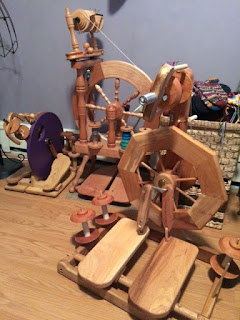 She spins very well, minimal noise from the bobbin design.  There are no cores in the bobbins like other wheels.  Its straight up wood holes, so they chatter and jiggle on the shaft sometimes, but its very rhythmic, so not annoying.

The orifice is HUGE!!! 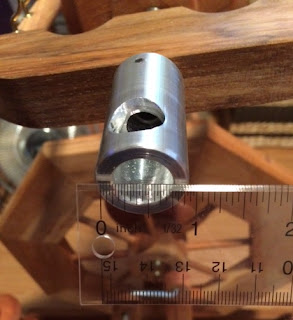 I had fun testing her out with some left over BFL from another spin ... 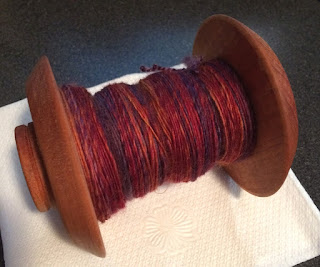 The bobbins are also HUGE to go with that big orifice.  This is probably around 2 oz or so on there and you can see there's still plenty of room!

She's all unfinished reclaimed hardwood.  Every once in a while she'll need some oil - she's so small though its not a chore, once I had her all set up and spun a little on her I grabbed a rag and some lemon oil and shined her up.
Posted by Delusional Knitter at 11:13 AM 4 comments: 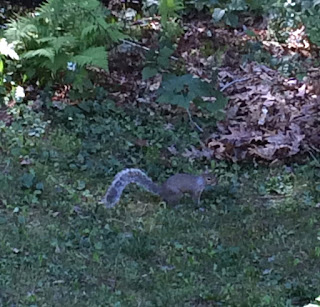 We have this crazy squirrel that hangs out in our yard.  I can always pick it out because its just so freakin weird.  Also, its tail is never puffy like the others, its very sleek.  It also walks a lot - where the other squirrels all hop to get around.  When I first noticed it, I thought it was ill, except then I started noticing that all the things it does are very energetic and it looks very healthy.

It randomly decides to wrestle around on the ground and do somersaults ... ALL BY ITSELF - like its wrestling a phantom squirrel.  I'm not sure the other squirrels like to associate with it.  I've seen it eating leaves and flowers (I am wondering if it was mimicking the groundhogs).  And one day when a skunk was below the bird feeder munching on seeds, all the other birds, squirrels and chipmunks were nowhere to be seen ... this guy was about 2 feet from the skunk checking it out.  All squirrels use their hands to pick up food and things, but this one uses its hands more like a raccoon or a monkey.  While it does odd things and I sometimes think its mentally disabled, I think it might actually be an idiot savant (mostly because its still alive and hasn't been picked off by a hawk).

Today I saw it eating a mushroom (which may explain a lot) then commando crawling across the ground ... it is an oddball for sure!

Posted by Delusional Knitter at 10:50 AM 2 comments:

FO: Take it All Shawl 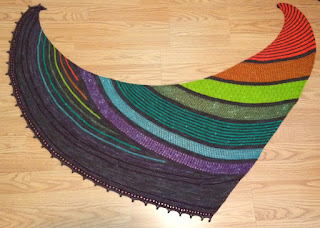 This is a great pattern.  Its super simple, but never boring.  Its knit sideways starting with a few stitches that continually increases to 200+ at the end.  There are two options for the last section, I liked this one with the picot bind off. 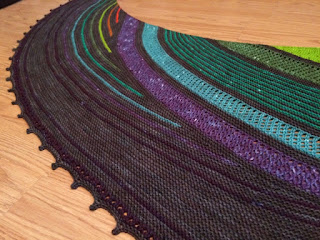 The pattern called for one MC and 8 CC.  It suggested solid or tonal yarn (not striping or variegated).  Since most of my sock yarn stash is striping or wildly variegated, I decided to dye up some yarn! 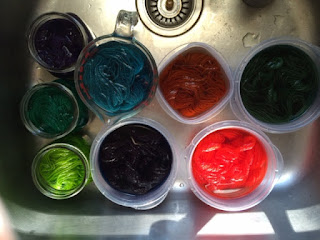 I used Wilton's Color Performance System - a liquid food coloring.  This gives a much wider range of colors (while staying non toxic for the kitchen sink). 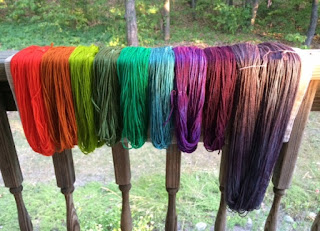 Just for curiosity sake I kept track of how long this shawl took to knit.  Ever have those non-knitters or crafters 1) ask you how long something took to make and 2) tell you that you should sell these things (to make money).  Well I now have an answer to them - I had a snarky ballpark comment I usually give - "Do you want to pay $350 for these socks?!?!" Now I know I wasn't that far off:

It took 30 hours to knit this, that doesn't include weaving in the ends ... 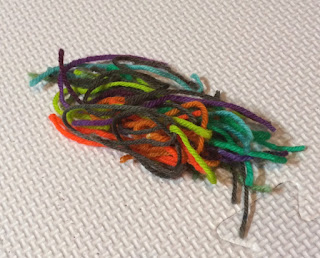 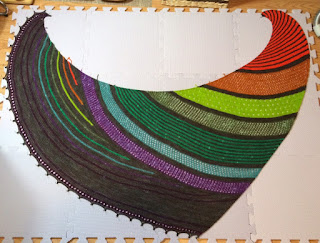 Now you know ;)
Posted by Delusional Knitter at 7:50 AM 2 comments: 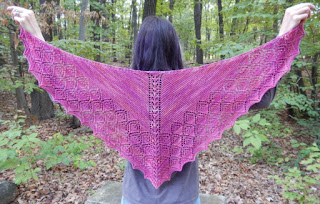 Micala is a heart shaped shawl knit from the top down beginning with a garter tab. The body is worked in garter stitch and lace with a lace spine.

Comfy garter stitch flows into open and airy lace making this a perfect accessory in early Spring and late Fall. Delicate enough for evening wear and intrepid enough to spice up jeans and a t-shirt. 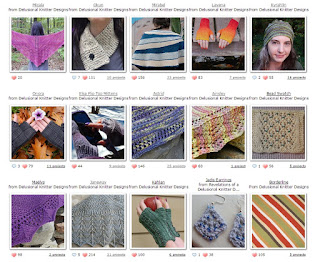 20% off any patterns in my Ravelry shop Delusional Knitter Designs with coupon code DOGDAYS now thru 8/31!! 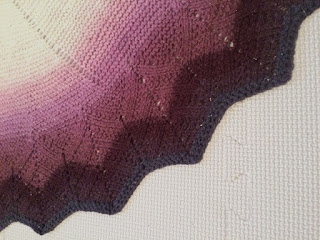 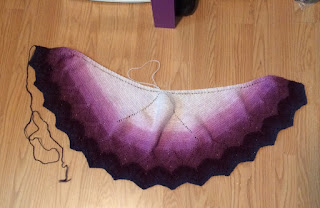 There was some yarn chicken involved in this one ... above was all that was left after bind off.  I excluded a few rows at the end. 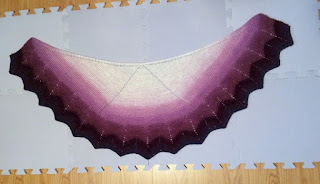 It was fun to knit something up with handspun and this shawl was specifically made for that and could easily be adjusted for different yardages.  This was one of my first handpun skeins and also a first for chain plying. 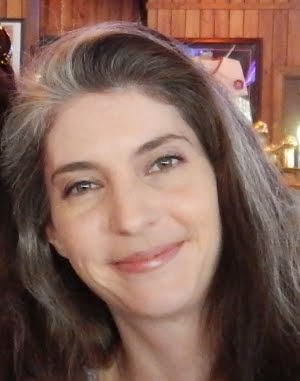 Revelations of a Delusional Knitter Podcast

Donate to the Podcast!

Revelations of a Delusional Knitter - For the Frenzied Fiber Fanatic 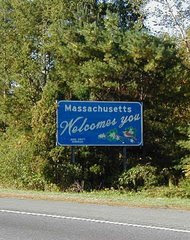